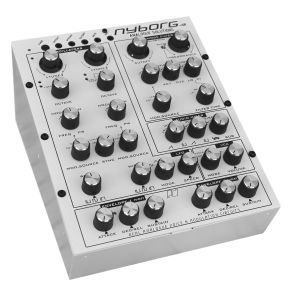 An analogue renaissance has ensured that the one-time state-of-the-art sounds of analogue synthesisers have long since become highly sought after again. Why? Well, many musicians realised that the convoluted menu-driven access systems deployed on many ‘modern-day’ digital synthesisers with weaker sounds bathed in built-in effects are no substitute for the hands-on immediacy of having access to a control per function at hand when it comes to speedy sculpting of ear-opening and often powerful electronic sounds suited to a variety of musical genres. With more mainstream recording artists and producers than ever now relying on custom sounds as a result of this rising and renewed interest in analogue (subtractive) synthesis, is it any wonder, then, that yesteryear’s often wonderful-sounding (though not necessarily reliable) analogue classics are rapidly rising in value, pushing them out of reach of many musicians of more meagre means? Meeting this demand head on, more analogue synthesisers than ever before are available today from manufacturers both bigger and smaller. Into this healthy and highly-competitive climate comes Analogue Solutions’ latest analogue offering, the Nyborg-12 SEM synthesiser — so-called on account of its 2-Pole 12dB/Octave MULTIMODE FILTER, the same flexible filter with LP (lowpass), BP (bandpass), HP (high pass), and NOTCH settings that is used on Analogue Solutions’ own Telemark SEM semi-modular synthesiser, similar (though not identical) to Tom Oberheim’s original 1974-vintage SEM (Synthesizer Expander Module®), much sought after itself.