Just writing this as a reminder that pre-orders end 3/15/2020 at midnight. this is the final weekend to grab the E520 on pre-order.
Why does this matter? Well you will save $20, but you will also be able to take delivery 4-8 weeks before dealers!
also if you grab the 4ms pod bundle you save there too.

here is the direct info.
https://www.synthtech.com/shop

This is a pre-order for people that missed the Kickstarter campaign, and will end on March 15, 2020.

The E520 Hyperion is a 48HP wide Euro stereo effects processor. Using a 480MHz ARM processor and 64MB of SDRAM, the E520 offers effects in both the time-domain (delays/chorus/flangers/frequency shifters) and the spectral/frequency-domain (chromatic pitch shifting, spectral ‘freezing’, and others). Each effect has 4 assignable CVs, feedback, wet/dry mixing and a Bypass.

Please read these terms and conditions CAREFULLY before placing your order.

This is a pre-order for people that missed the Kickstarter campaign, and will end on March 15, 2020.

This is a bunble of the E520 Hyperion and a 4ms PODx powered, 48HP desktop skiff.

Please read these terms and conditions CAREFULLY before placing your order.

Audio Damage is Has released 3 new plug in VSTs available directly from their site. New versions of the Delay Plug in “Dubstation 2″, Reverb Plug in ” EOS 2 ” and the all new waveshaping distortion “Grind” are now available.

EOS 2 consists of four high-quality custom-designed reverb algorithms, made with the modern production environment in mind. Three different plate simulators and Audio Damage’s own Superhall algorithm give you a broad palette of reverb, and the easy-to-understand interface makes adjusting the algorithms to suit your track incredibly simple. 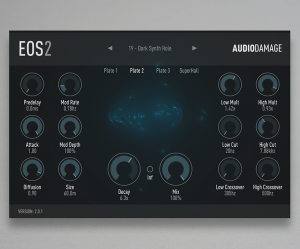 From the Audio damage site:

The original dub delay plugin and still the best! Dubstation 2 takes our most popular product and adds a whole raft of new features, including a dual mode for separate control over the left and right delay times, ping-pong, a new feedback saturation algorithm, and an LFO. Along with an all-new procedural and Retina-friendly user interface and (FINALLY!) ProTools compatibility, this represents a major leap forward for one of our signature products.

All those bells and whistles aside, the heart of Dubstation is our painstaking bucket-brigade delay model. Often imitated, but never duplicated, Dubstation has been the go-to plugin for that sound for over a decade, used in thousands of commercial productions, and with good reason. With the addition of the LFO and saturation controls, Dubstation has moved in to the realm of tape delay emulation as well, and is a sonic Swiss Army knife for delay. 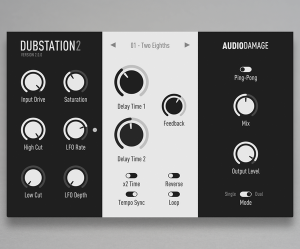 from the AD site:

Grind consists of three main blocks: wavetable lookup, in to algorithmic saturation/distortion/, and finally to a multi-mode filter. The wavetable module uses the amplitude of the incoming signal to replace the sample with one from 15 different linearly-interpolated wavetables, chosen for their mangling potential. Window size and phase controls provide further tone-shaping possibilities.

The next stop is the algorithm module, with eleven different distortion and saturation algorithms, from simple soft-knee saturation on up to full on sine warping.

After this, the signal passes through a multi-mode filter stage, with eleven different filter models to choose from, including “vintage digital” versions from the early days of plugin development, on up to our modern analog-modeled MS20-style lowpass and highpass synth filters. A tempo-synced LFO provides motion for the filter frequency, and a final stage of soft clipping and DC filtering tames the output.

Make no mistake: this is not a subtle, polite tool. With careful tuning of the provided presets, it can be tamed to normal filtering and saturation duties, but on the whole, it is a noisy, snorting beast of a plug-in, and is happiest with Full Metal audio destruction. 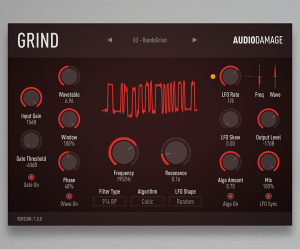 OK enough with the AD copy. I have had some time with all three of these (I even created a group of presets for Dubstation 2). I can say these are a really nice step forward in the Audio Damage line up. The UI is really impoved on these (Grind and EOS2 have some killer front end graphics to help understand whats going on).

Grind really impressed me in its filter types as well as how the distortions can take a plain sound and add a ton of movement and character.  Similar to the Eurorack module Shapes also from Audio Damage, Grind lets you sequence lookup tables and waveshaping wavetables… very freaking cool.

tempo syncing the waveshaping and filter frequency changes is a joy.

Dubstation 2 is a very straight foward BBD sounding delay that will let you just easily get that dub delay you are after without a cluttered interface.

EOS 2 is just a joy to look at and hear. I’ve been using this to create gorgeous synth pads and basically create environments for my instruments to breathe in.

The Dual Looping Delay (DLD) is an advanced audio processor for creative synthesis. Not a tape or analog emulation but a modern crystal-clear digital delay, the DLD combines features of delay, looping, and sample-tight synchronization for powerful and dynamic sound capture and modification. The DLD is designed to integrate seamlessly with modular timebase and sequencing devices such as the 4ms Quad Clock Distributor (QCD), etc. 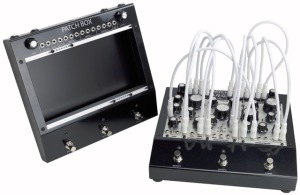 To protect the tone of user instruments, thoughtfully the Patch Box features a true BYPASS and a unique preamp with extremely high headroom in addition to a pair of fully-buffered outputs. Custom-engineered soft-limiting circuitry built into the preamp adds character without unwanted noise at higher gain settings. Said preamp has dual, buffered outputs to allow for complex signal routing, but for patching a single modulation or audio source into two destinations, the patchable signal splitter is a perfect solution. Also known as a MULTIPLE, the signal splitter has one input and two outputs, allowing any signal to be routed to two destinations.
Dual, assignable expression pedal INPUTS allow the Patch Box to easily integrate third-party expression pedals anywhere into the signal path to allow for realtime foot control of any voltage-controllable parameter or split the signal from the foot controller to control two parameters at once. Dual, assignable A/B foot switches — SWITCH 1 and SWITCH 2 — expand signal routing options. Perfect for use as on/off switches or to flip between two signals, the foot switches can be patched up to enable/disable individual modules or route audio and control voltages. Try patching a modulation source, such as an LFO (Low Frequency Oscillator) or external expression pedal, through the foot switch to enable or disable the modulation while playing. Patch the outputs of two effects into one of the foot switches to bounce between effects. With two independent, patchable foot switches to play with, there are countless options for realtime signal routing. The last stage of the Patch Box signal path is a master OUTPUT level control. Adjust the output signal level to connect with a wide range of devices.
END_OF_DOCUMENT_TOKEN_TO_BE_REPLACED