Dove audio is proud to announce a completely new concept in waveform morphing for it’s new oscillator module for both Euro and MU(MOTM and dotcom) modular systems.
The Window Transform Function (WTF) is a radically different way to morph between two waveforms, create a hybrid mix of two waveforms previously unheard of. 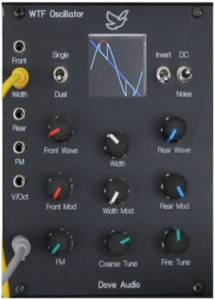 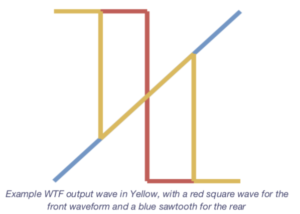 The concept is a relatively simple one, two waveforms are used (front and rear) and are synchronous. A ‘window’ can be opened in the front waveform allowing a portion of the rear waveform to be ‘inserted’ into the front waveform. It is also possible to have dual windowed waveforms (as shown in the picture above).

Below is a drawing showing the resultant output when windowing a sawtooth with a square wave.

Example WTF output wave in Yellow, with a red square wave for the front waveform and a blue sawtooth for the rear

A video showing the window transform function in use is given below;

The oscillator also has a tuneable noise feature, demonstrated in this video;

The WTF oscillator will first be available in both Euro-rack and MU(dotcom and MOTM power) modules via our Kickstarter campaign, here –

After a 12+ month break the world of synthesizer design Paula Maddox is back with a new company and fresh new ideas in the form of Dove Audio. She has a proven track record spanning nearly 20 years for delivering high quality and unique designs to the industry.

I plan on having Paula on a show in the Near future to discuss Dove audio and the WTF oscillator.