With that in mind, grammy-nominated sound designer and producer Snipe Young created a plethora of small musical scenes inspired by blaxploitation films of the 70s. These soundtracks – by renowned composers like Curtis Mayfield, Isaac Hayes, Sun Ra, and Herbie Hancock – contained funk and soul grooves sought after by the hip hop producers in 90s New York. Staying true to the genre, Snipe created intricately orchestrated samples chopped to emulate the SP-1200’s loose editing. From romantic string interludes and triumphant horns, to sinister melodies, dirty bass phrases, and energetic drums, STREET SWARM is full of undiscovered gems, waiting to be sliced and crunched in that classic style.

STREET SWARM also includes bass guitar, electronic keyboard, horn and retro synth stabs and licks organized by key, so hip hop producers and musicians can play their own melodies. Producers who want to add texture and flare to their creations can also utilize the included FX macros to create something sonically different that matches their own style. 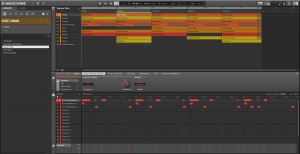 STREET SWARM runs in the latest version of MASCHINE software on the entire MASCHINE hardware family, and is available exclusively at the NI Online Shop.

A compact version of STREET SWARM is also available as an iMASCHINE 2 Expansion, for sketches on the go. Tracks can be exported to MASCHINE STUDIO, MASCHINE JAM, MASCHINE, and MASCHINE MIKRO for completion.

Additional information on STREET SWARM is available at:
www.native-instruments.com/streetswarm