Touch screen music making is all the rage these days… so whats the hold up?

Lately like many other people I have been very intrigued by the abundance of musical apps on both iOS and android os. My wife in all her gadget glory had numerous tablets, an iphone and an iPad 3. I being more interested in blowing my money on synths was relegated to a lowly iphone 4 and now a galaxy s3… I had been mucking about on all the tablets and phones in the house but things got a bit more serious when first I decided to buy both of my childeren Nexus 7 tablets for xmass and followed up with an ipad 4 for myself soon after.

so the App downloading went into full bore. One of my major curiosities was how the nexus 7 on the latest android os (4.2) which is supposed to solve all latency issues would fair. heck if it was really good I wouldn’t mind buying myself one as I enjoy the open attitude of the android platform. So I set out to find the best Android beat making apps and test out the touch devices finger drumming capabilities.

what I found… was disappointing to say the least.

I first headed toward Supreme MPA as I was a supporter of this early on and had read about how they had been able to achieve “< 10 ms latency” …. Like most things that sound to good to be true, this was in fact false. The first indication was when I loaded up the app and just randomly tried to finger drum out a 4/4 pattern to no avail. I thought to myself. I must be doing something wrong. I checked all settings, I tried the app on my galaxy s3, my moto droid, a friends Razor maxxx and even an evo 3d (as supreme himself wrote me claiming this was the phone he was able to achieve this number) again all failures. I decided to take the app to task and take it into my studio. I recorded me tapping the nexus 7 on a short hi hat sound that was truncated with no space before sound. the results were at best 94 ms and up.  certainly not usable for keeping time in a drum beat.

when I contacted Supreme about this issue I received a tirade of backtracking answers rude comments and he revoked my license to the app. luckily I had already done the test and taken pics of it. Keep in mind I tried to inform him that this problem was not unique to his app, I was simply trying to understand how he came up with this 10ms claim (which at the time is answer # 1 in the FAQ of his app). android having an issue with latency is one thing. making false claims is another. 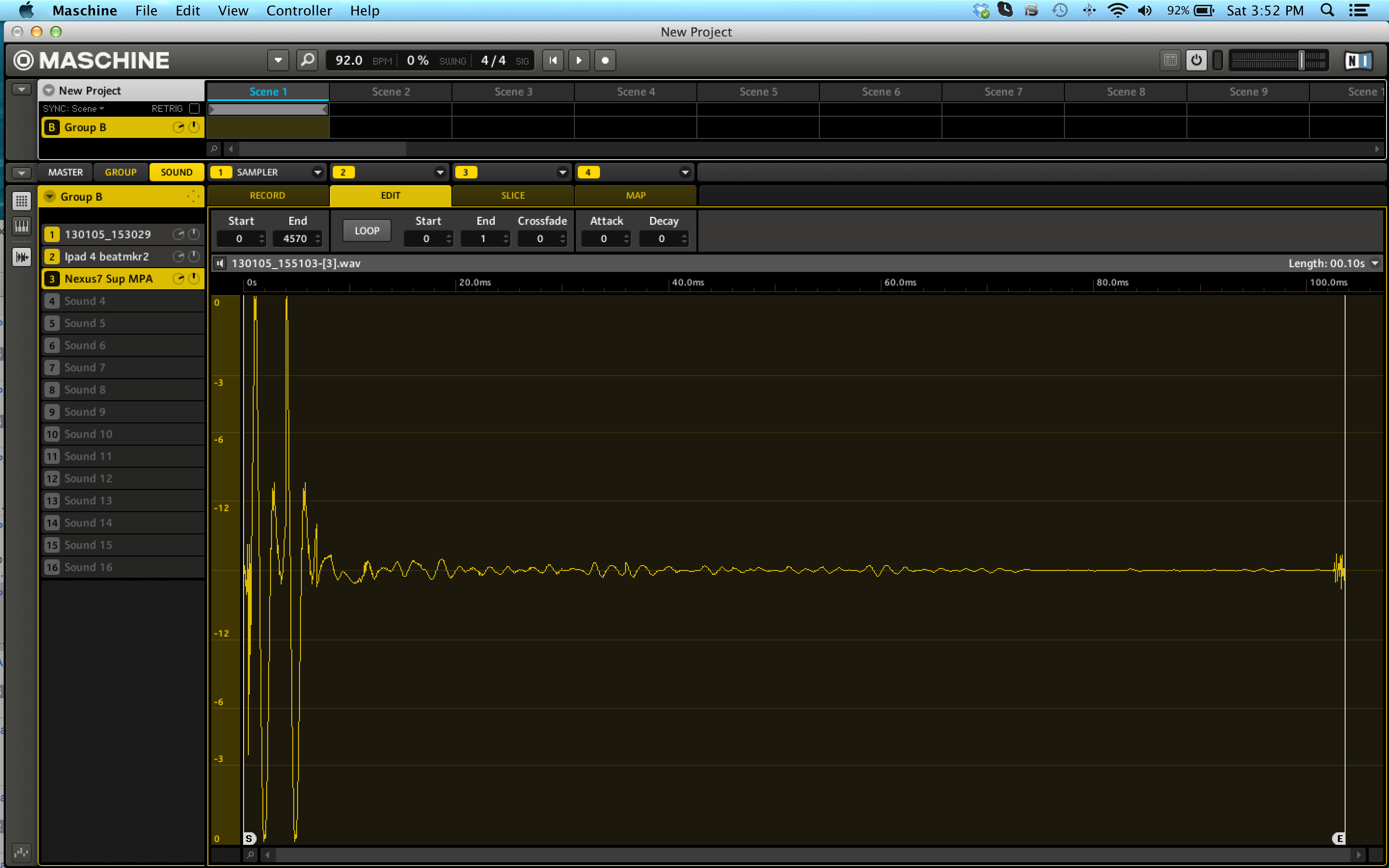 Now on to iOS .. on both my iphone 4, ipad3, and my new ipad 4 I have never had a problem keeping time of fingerdruming on beat maker 2 or any of the apps for that matter.

so I loaded Beat maker 2 and and tested it out. the round trip latency (time from finger hitting the screen till sound was made) turned out to be roughly 33ms -37ms. 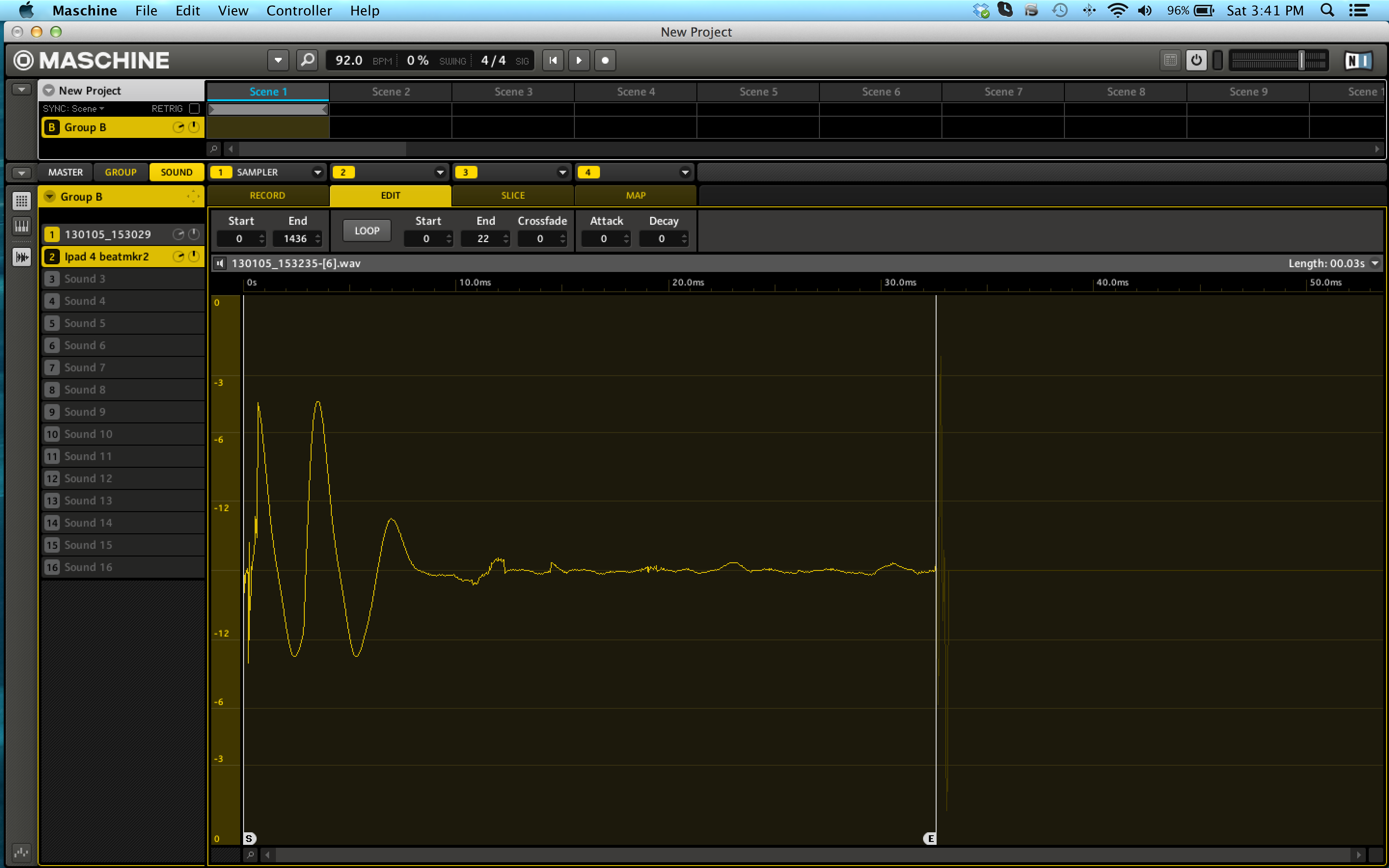 I huge improvement over the android latency but still not instant. workable … but not near as fast as something like maschine or a real mpc. but as I said… still very usable.

I then loaded up impc which doesn’t have a setting to control latency like beatmaker 2. I found that impc was roughly 42-45ms  slower for sure but still fairly usable. (of course its lack of features made me quite irritated… an mpc that can’t slice samples??? are u serious?) 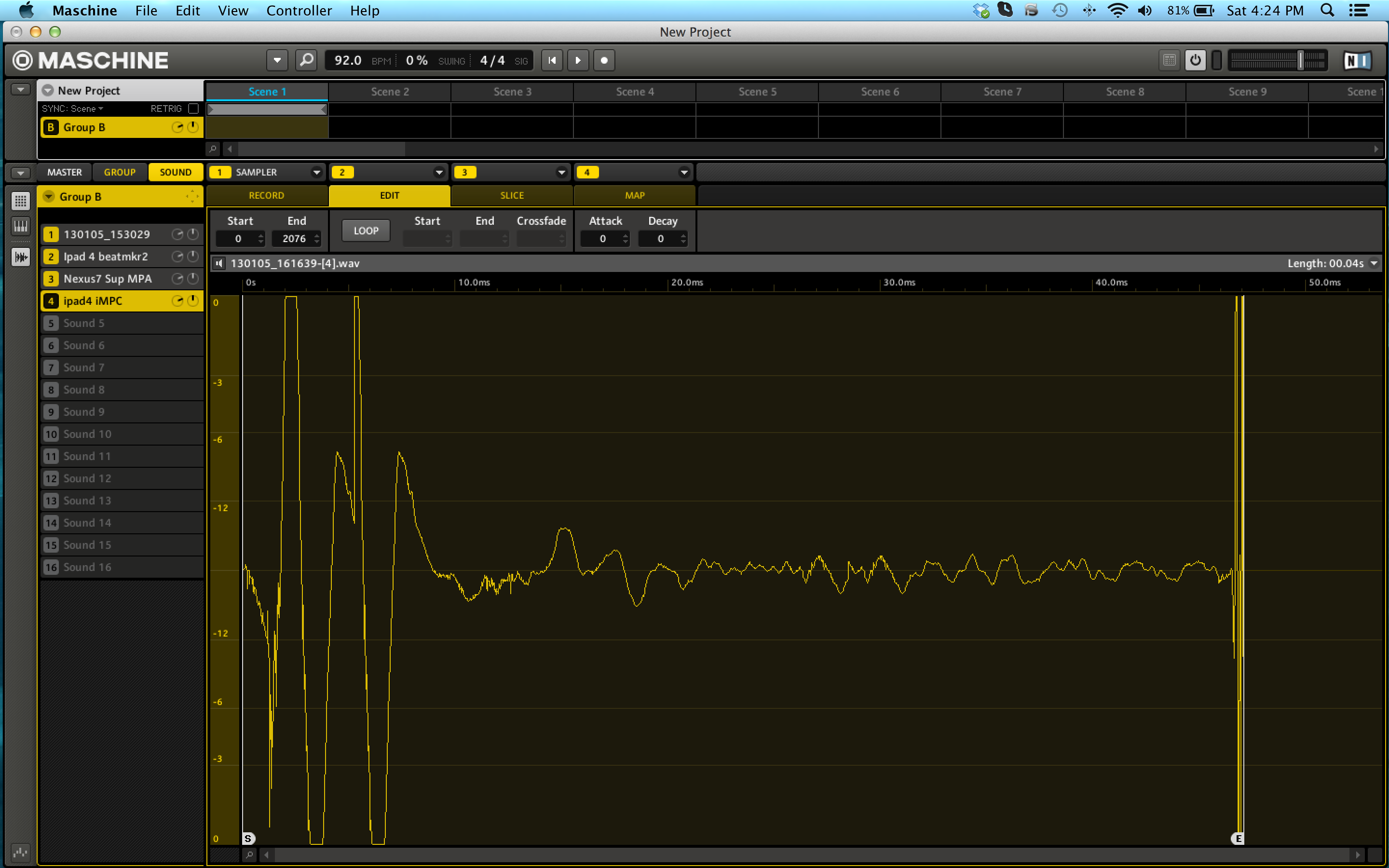 So with these numbers being said what does this mean for Us music makers using touch screens?

well for one it means that companies are certainly interested in improving latency to get usable products in our hands. but I feel it also means that android is still sadly not there yet. I’m not a developer so I can’t fully get into the cause behind the jellybean and butter latency issues. but I do hope to see continued improvement.

anyway more on touch apps as time goes on. just thought I would share my findings with the world.