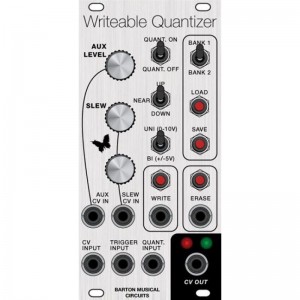 The writeable Quantizer(WQ) is an interesting module in that while it can function like a traditional sequencer, it is anything but traditional. What sets the WQ apart is that this quantizer doesn’t come with preset 1/12v divided scales like most quantizers do. Instead the WQ allows users to store voltages into a user defined “scale” and then quantize incoming voltages to those stored voltages. You can use traditional scale values and write those voltages to a traditional scale but what is the fun in that? The real fu
n in this is When you write microtonal or non traditional scales into the WQ. A lot of the joy of using an analog non-quantized sequencer is finding those cool patterns and “in-between” notes that just sound cooltraditions be damned. The WQ allows you to store and remember those cool scales from your analog sequencers and recall them later, or Heck store random voltages from things like LFO’s or random generators likea Turing machine. A fun way to get cool tones is to just shoot it some melodic pitch cv and randomly hit the modules “write” button storing those voltages to a scale. Then you can input something like a random lfo and watch how it changes the pattern of the notes yet keeps the same feel.  After a couple days of just mucking about with this module I found that a lot of joy can be had by shooting clock divided gates into the slew input. This will allow you to break away from the quantized value in a musical way. Using the attenuator you can decide just how far of a slew you want. Then shoot another division into the quantize input to turn quantizing on and off for even more variations.

Available as both a kit or as a completed module or even on the Synthcube.com Module leasing program now!