LONDON, UK: following its introduction at The NAMM Show 2017, MIDI solutions specialist Kenton is proud to announce availability of its new MERGE-8 — an eight-input intelligent MIDI merge unit designed, built, and assembled in the UK as the latest addition to its well-known line of MIDI utilities — as of May 4…

MERGE-8 can work in two modes: first is a full eight-into-two merge, where all MIDI data received across the eight input ports is merged into two outputs (with both ports outputting the same data); second is a split mode, with two completely independent four-into-one merges. Mode is set with a recessed push button and indicated with a bicolour LED. MERGE-8 stores this setting in EEPROM and starts up in whichever state it was last in.

Featuring a 32-bit ARM microcontroller for super-fast MIDI processing, MERGE-8 can handle large amounts of data. It is intelligent in that it applies merging rules to process the MIDI data from the inputs in the optimal way.

MERGE-8 is housed in a robust brushed aluminium case, measuring 155 x 80 x 35mm and weighing just 220g. With the famous Kenton build quality and reliability, MERGE-8 is able to withstand the knocks of a life on the road as part of a large keyboard rig, yet it is just as at home in the studio… powered from an included region-appropriate AC adapter — just fit and forget. 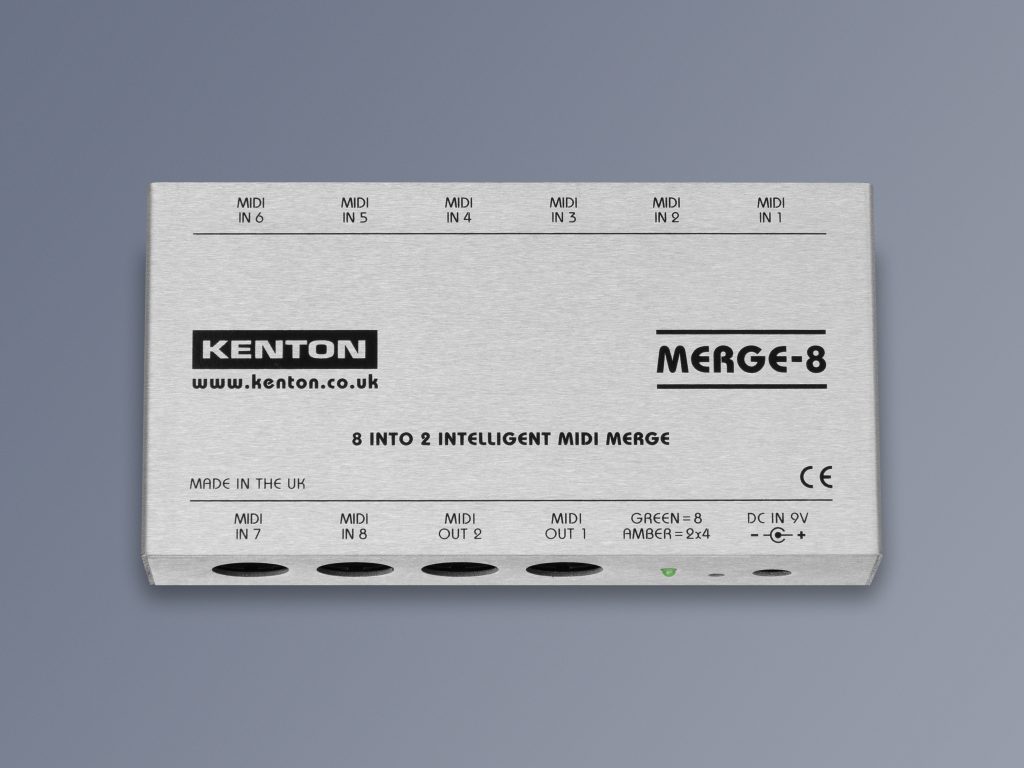 About Kenton (www.kenton.co.uk) Kenton was founded in 1986 by UK musician John Price, who began by building a more cost-effective and well-specified MIDI interface for his beloved Oberheim OBX programmable analogue polysynth than was otherwise available; word soon got around, and today the company designs and manufactures a wide range of far-reaching MIDI solutions for famous and not-so-famous clients alike around the globe from its South West London-based HQ: “People often ask where the name Kenton came from; my father, Wylie Price, was a bandleader in the Forties and Fifties, and was a big fan of Stan Kenton, so, when I was born, I was given Kenton as my middle name.” © 2017 Kenton Electronics Ltd