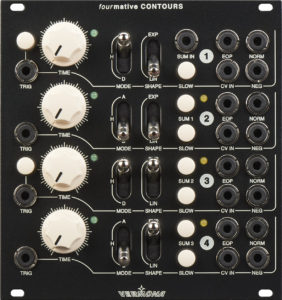 Electronic sound tools creator VERMONA is proud to announce availability of fourMative CONTOURS — its first ‘envelope’ entry to the ever-expanding Eurorack small-format modular system world without resorting to type, far exceeding the functionality of a traditional envelope generator and typically following the company’s naming scheme for its Eurorack modules to reflect the fact that it delivers up to four single-phase envelopes that can be combined to achieve much more complex voltage-controlled curves — as of November 9…
VERMONA makes no secret of its admiration for the classic ADSR (Attack, Decay, Sustain, Release) envelope generator; indeed, it is well versed in its strengths, having implemented various versions into its desktop devices over the years. Yet the company collectively decided that its first Eurorack-compatible envelope generator should not resort to type, instead rising to the challenge of realising a unique and flexible concept without compromises being made.
Mission accomplished? Actually, the prototype presented its erstwhile ecstatic creators with an unforeseen headache: how to name a module which was planned as an envelope generator but ended up exceeding expectations by so far? Fortunately for VERMONA, various proposals were supportively submitted to Twitter in response to a small survey. Settling upon fourMative CONTOURS, the company collectively felt that this does not pin down the module’s function to being that of just another envelope generator, but rather reflected its purpose while typically followingVERMONA’s Eurorack module naming scheme.
So what warranted the fourMative CONTOURS name, and what, exactly, does this module do differently? First and foremost, fourMative CONTOURS delivers up to four single-phase envelopes that can be combined to achieve much more complex voltage- controlled curves. Therefore, the module itself features four individual channels (or units in ‘VERMONA-speak’), numbered accordingly on its front facia. Flexibly, each unit can be switched into A (attack), D(decay), or H (hold) MODE — with the attack and decay phases switchable between operating with a LIN (linear) orEXP (exponential) response SHAPE — and can be used individually or in any combination. Those tasty features alone are enough to set fourMative CONTOURS apart from the Eurorack envelope generator pack, putting it in prime position for handling many modulation tasks.
The envelopes themselves are seriously snappy; each unit can run within a TIME range of 0.5 milliseconds through to 30 seconds, switchable between perfectly balanced fast andSLOW speed settings to ensure smooth adjustments, with the former geared towards creating crisp and percussive sounds. Saying that, that’s only half the story here, however, since those fourMative CONTOURS units are each equipped with a CV IN (control voltage input) that not only allows the times to be modulated but also extends them in both directions — down to 25 μs and up to 10,000 seconds, so if a two-hour-long envelope is needed then fourMative CONTOURS can handle it!
Individual units can be looped or combined with other units using simple internal patching connections to create more complex envelopes. Thanks to those extended frequency ranges, fourMative CONTOURS can creatively also function as an LFO (Low Frequency Oscillator) or even an audio oscillator.
On the face of it, fourMative CONTOURS clearly goes far beyond the capabilities of standard envelope generators, and anyone looking for a versatile modulation source should surely consider giving it a try. The creators themselves are quietly confident that there are many more scenarios where fourMative CONTOURS can be pressed into play, filling in some equally exotic Eurorack small- format modular system blanks, so-to-speak — not just the 24HP/3U rack space the module itself obviously occupies!
Shipping now, fourMative CONTOURS is available to purchase through VERMONA’s growing global network of dealers (http://www.vermona.com/en/dealer/) with an RRP of €399.00 EUR (Europe) and $489.00 USD (USA).
For more in-depth information, please visit the dedicated fourMative CONTOURS webpage here: https://www.vermona.com/en/products/modules/product/fourmative-contours/ 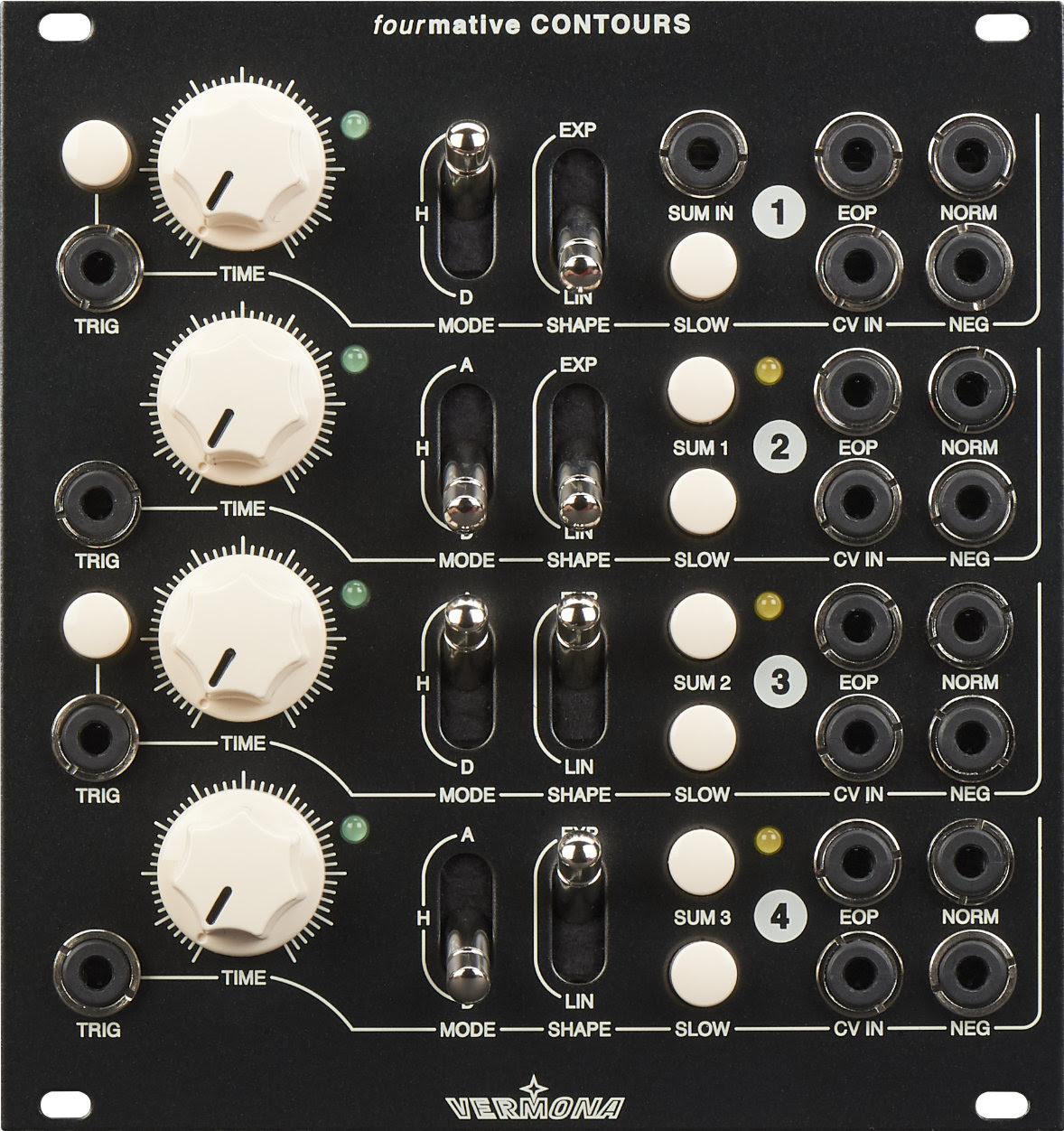