Erica Synths announces its latest breakthrough desktop device: Matrix Mixer. As Eurorack users may know, it can be challenging to change a patch radically during a performance, therefore diverse performances often require large systems or end up being extremely experimental. What if you could repatch your system with the push of a single button?

The new Erica Synths Matrix Mixer is a 16 I/O desktop patch matrix that can route and mix signals with high precision, create buffered multiples and random patches. It can also interface external instruments with your Eurorack system, yet is not limited to Eurorack.

The Matrix Mixer can be used with semi-modular synthesizers, as well as through adapter cards with the EMS Synthi and Buchla Music Easel. Thanks to simple patch changes via panel buttons or MIDI program change messages, the Matrix Mixer will be particularly useful in performances that combine Eurorack and other performance instruments — such as drums, guitars, wind instruments, and much more. This presents a new and elegant way to make your modular performance stand out.

The Matrix Mixer will begin shipping late this month and is priced at €490 or $599 USD. For more information or to pre-order, please visit the Erica Synths webshop.

ZAOR Studio Furniture furthers MIZA range reach with MkII modifications and additions
ORADEA, ROMANIA: stylish, ergonomic, and affordable studio furniture-maker ZAOR Studio Furniture is proud to announce availability of several new revisions and additions to its marketable MIZA product line (catering to the ever-widening range of musicians, DJs, video artists, and such like looking for a comfortable and yet affordable working environment) — namely, the MIZA D-Stand MkII desktop speaker stand, MIZA Jr. MkII flexible media desk, MIZA Rack 12 MkII and MIZA Rack 16 MkII side racks, and MIZA V-Stand 36 and MIZA V-Stand 42 speaker stands — as of September 20…
As implied by name, MIZA D-Stand MkII marks ZAOR Studio Furniture’s new and improved revision of its original MIZA D-Stand desktop speaker stand from four years back. Benefitting from a more modernised (all-black) look, it includes more features. For starters, it is now height-adjustable by up to 50mm (above its 200mm-high horizontal configuration) and can also be angled at up to 9° while providing better acoustic isolation courtesy of four hemispheres made out of a synthetic viscoelastic urethane polymer that minimises transmission by up to 95%. With weight-bearing capabilities belying its diminutive (260mm x 260mm) footprint — up to 25kg when used horizontally and 15kg when angled, a pair of MIZA D-Stand MkII desktop speaker stands can be added to any desk to turn it into a production environment easily and speedily. 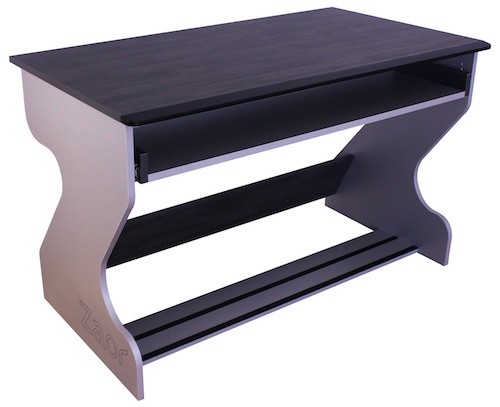 Similarly, MIZA Jr. MkII marks ZAOR Studio Furniture’s revision of its original MIZA Jr. flexible media desk for computer-based workflow while targeting video and audio applications. As such, this time the company set about streamlining the production process, resulting in a reduced RRP (Recommended Retail Price) — down to €439.00 EUR (for MIZA Jr. MkII) from €499.00 EUR (for MIZA Jr.), so the end result remains focused on providing the user with a no-compromise workspace without breaking the bank. Better still, specifications remain remarkably similar to what they were with a perfectly sized (1250mm: W x 650mm: D) top plate for fitting into smaller spaces. Saying that, this is supplemented by a 61-note keyboard controller-accommodating (1129mm: W x 308mm: D) pullout draw, which is height adjustable in seven steps of 7mm, while a lower passageway positioned rearwards retains unsightly cables, conveniently keeping them out of sight. Strongly constructed from Melamine-faced chipboard with a strip of solid wood along the front edge of its top plate for aesthetic and protective purposes, MIZA Jr. MkII is available in Cherry/Black and Wenge/Grey finishes, flat packed for easy transportation and assembled easily. 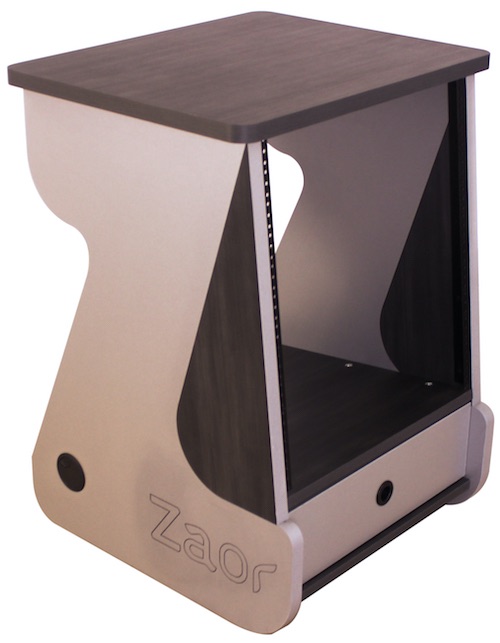 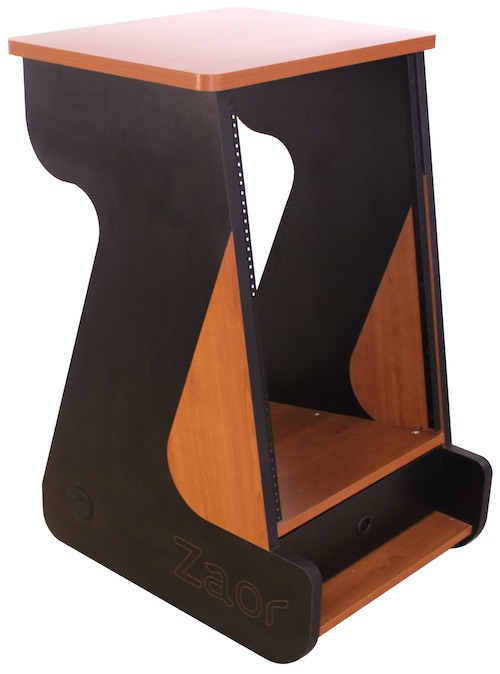 Ending on a new-fashioned note, the self-explanatory MIZA V-Stand 36 and MIZA V-Stand 42 speaker stands are an all-new addition to ZAOR Studio Furniture’s marketable MIZA product line. Like the musician-friendly MIZA D-Stand MkII before them, they marry a modern (black-finished) look with a moderate cost, but not at the expense of delivering a stable solution with zero resonance — everything needed in a fixed-height 36-inch (MIZA V-Stand 36) or 42-inch (MIZA V-Stand 42) speaker stand, in other words. While absolutely affordable, MIZA V-Stand 36 and MIZA V-Stand 42 adhere to the best standards of technical performance and design, both benefitting from a (300mm x 300mm) top plate-affixed Aerstop absorption pad for decoupling speakers weighing up to 40kg from within whatever room they are asked to perform — perfectly levelled, thanks to adjustable feet on the (300mm x 300mm) bottom plate.
Put it this way: with the MIZA V-Stand 36 and MIZA V-Stand 42 additions available alongside the MIZA D-Stand MkII, MIZA Jr. MkII, and MIZA Rack 12 MkII and MIZA Rack 16 MkII revisions, ZAOR Studio Furniture is now even better positioned to cater to that ever- widening range of musicians, DJs, video artists, and such like looking for comfortable and yet affordable working environments. 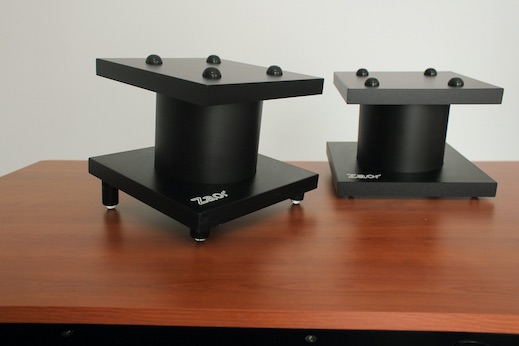 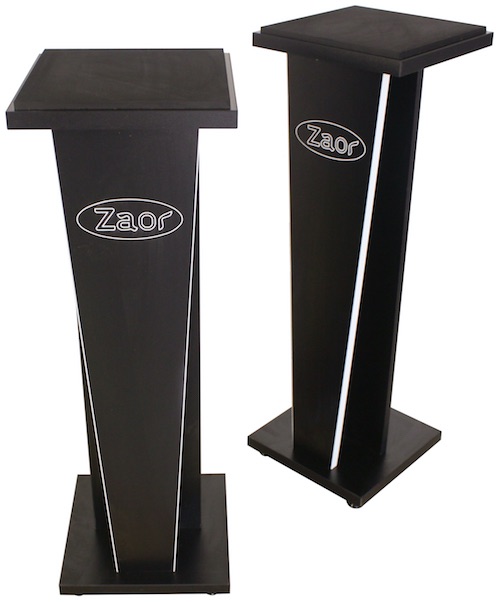 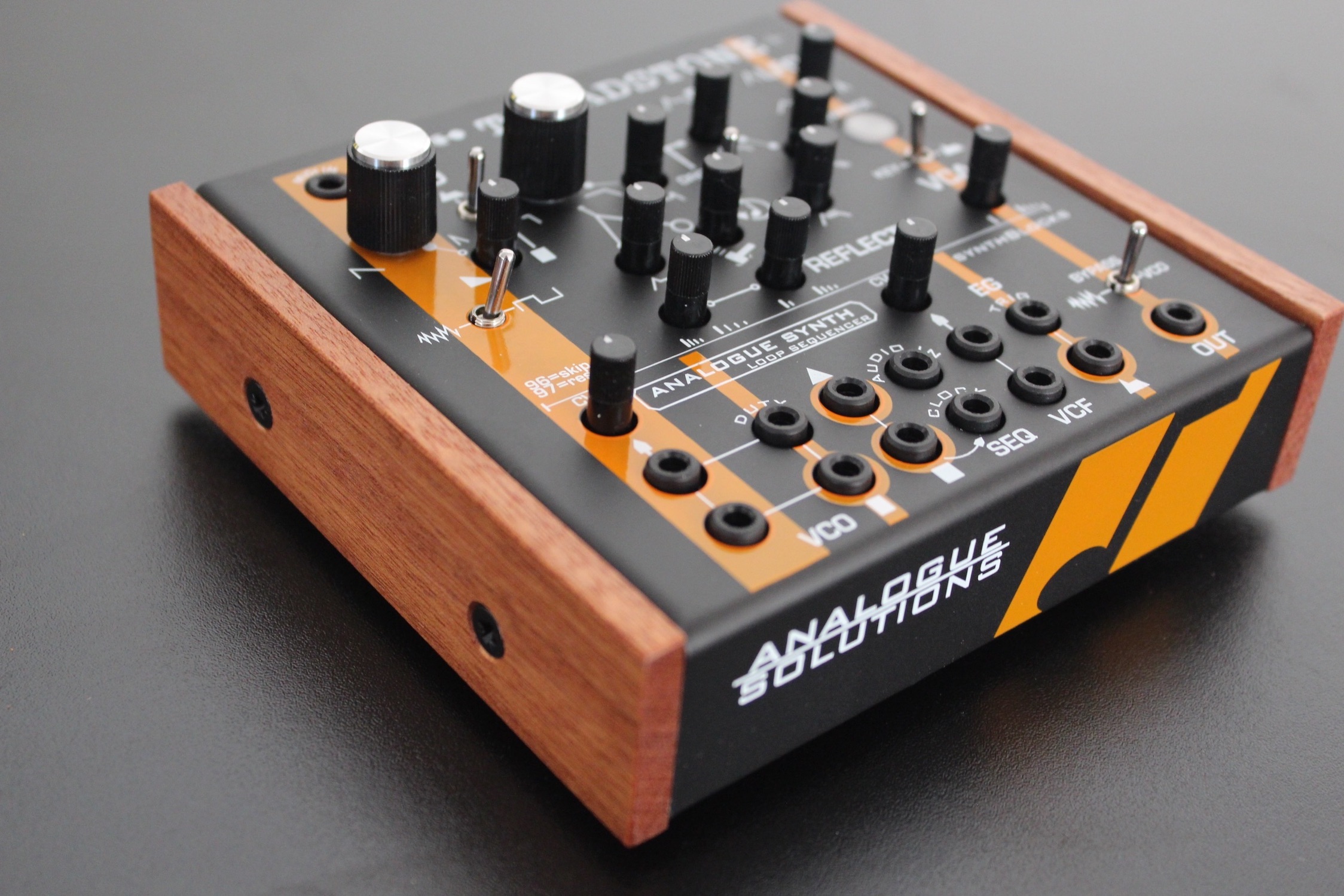 KINGSWINFORD, UK: hot on the heels of its inaugural Mr Hyde and Dr Strangelove so-called synthBlocks (launched late last year to widespread critical acclaim), British boutique electronic instruments innovator Analogue Solutions is proud to widen the self-explanatory series’ scope with Treadstone — taking the same smart, small, and affordable desktop design-driven analogue attributes of its similarly superior-sounding signal-processing siblings and applying them to a true analogue mono synth that packs a lot of (patchable) punch into a perfectly-matched, portable package — as of January 19…
Treadstone takes its intriguing name from a fictional highly-classified, heavily-guarded secret program that features in the series of books based on a fictional spy and associated feature films; it is shut down as the thrilling plot thickens, alas. As the latest addition to Analogue Solutions’ synthBlocks series — squarely aimed at laptop and audio plug-ins-focused digital musicians wishing to apply analogue, hands-on hardware sound-sculpting creativity to their sometimes sterile-sounding computer-based creations, the tiny Treadstone true analogue mono synth is far from fictional, however; hearing is believing, but it would, without question, make for a superior-sounding, space-saving desktop addition to any discerning film composer’s creative studio space — or anyone else’s, for that matter!
More meaningfully, maybe, Treadstone treads far from carefully, but boldly goes where few analogue synthesizers dare to win… with an all-analogue audio path and modulation circuits based on superior-sounding designs dating back to the mid-Seventies, so no CPU (Central Processing Unit) stabilised and quantised circuits, no DCOs (Digitally-Controlled Oscillators), and no digital EGs (Envelope Generators), as are often found on other ‘all-analogue’ affairs. Analogue as in really analogue — aside from the MIDI-to-CV circuit (which, by its very nature, must include a digital element) — in other words.
Winning analogue attributes apart (as attested to by its immediately apparent sonic strengths), this pocket-sized powerhouse packs a lot into its 134 x 125 x 52mm diminutive dimensions — including a serious single VCO (Voltage Controlled Oscillator) with square and sawtooth waveforms plus noise and an associated sub-oscillator, a reissue of the classic SSM2044 4-Pole VCF (Voltage Controlled Filter) chip (as used in many classic synths, such as the Korg Polysix and Monopoly, as well as E-mu’s Emulator and SP1200 sampling trailblazers), an analogue echo (REFLECT), and a unique LOOP SEQUENCER (to input, edit, and play up to 16 MIDI notes) — while weighing in at only 420g! Get this, though: Treadstone is designed, built, tested, and assembled in the UK using only high-quality components as is the Analogue Solutions way, with a full rugged steel/aluminium case combined with real ‘analogue’ wood side pieces perfectly reflecting its polished pedigree.
Put it this way: what’s within certainly counts in large amounts, albeit admittedly appearing at odds with those diminutive dimensions. Digging deeper, putting Treadstone through its musical and experimental paces can be as complex or uncomplicated an experience as deemed necessary; needless to say, Analogue Solutions has treated Treadstone to a diversity of creative controls and accompanying patch sockets, surely satisfying even the most ‘battle-hardened’ subtractive synthesists around — hardly surprising since Treadstone was designed by Analogue Solutions founder Tom Carpenter. As a fervent fan of electronic music and also an active electronic musician himself, he naturally knows a thing or two about programming synthesizers. So his latest creation clearly wasn’t the result of engineering design decisions alone — nor driven by a steering committee of men (or woman) in suits. So what else is ‘inside’ this small but perfectly formed box of subtractive synthesis tricks, then?
Thoughtfully, Treadstone is fully compatible with the ever-popular Eurorack small-format modular system and operates on the 1v/oct standard, so, armed with a fistful of 3.5mm mini-jacks, justifiably serious synthesists can interface it with their modular system or have it act as an exceptional external voice for another analogue synthesizer — after all, Oberheim’s Synthesizer Expander Module® (SEM) started life as an add-on synthesizer module for fattening up Minimoogs before becoming a sought-after sound in its own right (with up to eight embedded in Oberheim’s groundbreaking Seventies-vintage polysynths). Reality shows that Treadstone sounds a lot fatter than it looks!
Looks, of course, can be deceiving. Demonstrating design flare and flexibility, Treadstone can capably turn its hand — well… knobs, switches, and patching — to any number of applications. Any time anyone needs analogue sound effects, fat basses, screaming leads, bleeps, blurps, zaps, and all manner of other crazy sounds associated with subtractive synthesis… try Treadstone! Then consider that Treadstone has an AUDIO IN (input) socket, so users can feed external sounds through the onboard analogue filters for analogue processing. Producing electronic percussion sounds — such as kicks, snares, hi-hats, and cymbals — is perfectly possible in the hands of skilled synthesists. Speaking of which, while Treadstone is partially pre-patched, many of these patches can be cancelled using the switches and controls. Indeed, it has such wide-ranging modulation routing possibilities that it is almost as versatile as a full modular system and can create similar sounds — and all without the mess and confusion of cables! Cables, of course, can be used to re-patch Treadstone, thanks to an abundance of carefully chosen patch sockets, or connect externally elsewhere.
Either way, Treadstone makes for a fine addition to Analogue Solutions’ synthBlocks series, and a superior-sounding, space-saving addition to any studio or stage setup. Synth in pocket, indeed… Treadstone’s no pretender!
UK purchase price for the Treadstone synthBlock is £499.00 GBP (including VAT), via dealers (https://analoguesolutions.com/global-distribution/) and Analogue Solutions directly.
North American availability of the Treadstone synthBlock is being handled via Voltage & Company (https://www.vcousa.com) — full-service reps of high-quality manufacturers from around the world — with a retail price of $599.00 USD, while (most) EU distribution is being handled by Sonic Sales (https://www.sonic-sales.de) — one of the largest full-service MI (Musical Instrument) distribution companies in Europe — priced at €589.00 EUR (including VAT).
For more in-depth info, visit the dedicated Treadstone webpage here: https://analoguesolutions.com/treadstone-synthblock/
Watch Analogue Solutions’ ear-tickling Treadstone teaser video here: https://youtu.be/CmLKV9_Y78g?list=PLq-KgzIcyyGFGRNp2SBlHy3YZdQq-9lb7

This is a chilled out show where I hang out in the lab and discuss topics live. 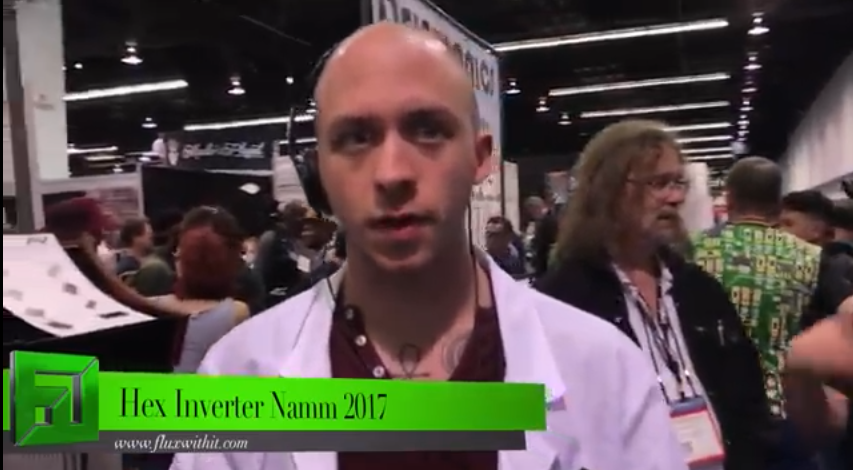