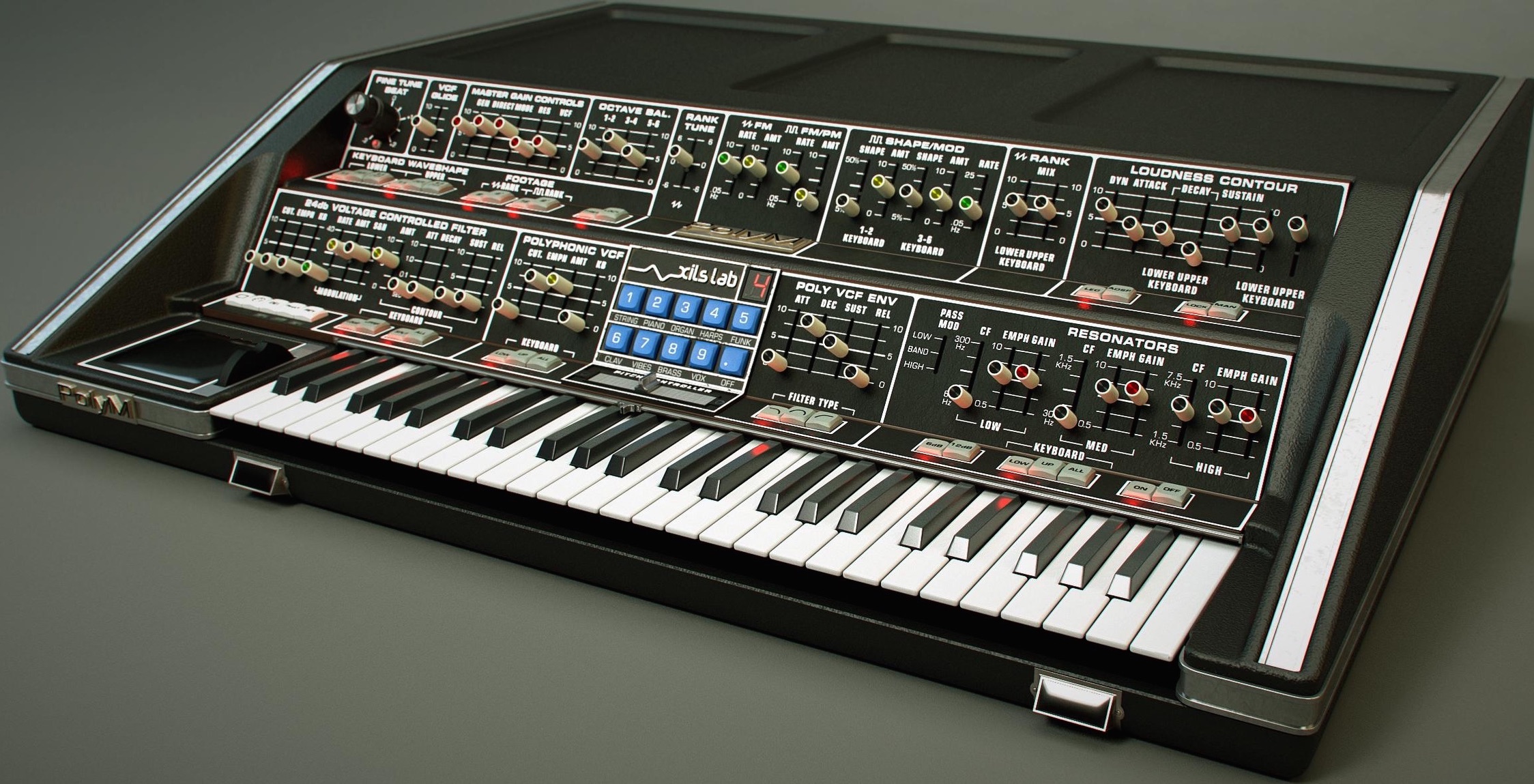 PolyM first put in an appearance last year, when XILS-lab clearly considered those oft-overlooked Polymoog presets to be well worth revisiting, recreating an ‘unlimited’ polyphony polysynth that was recognisably revolutionary upon its initial release and making it fit for today’s creative computer-based music-makers with a state-of-the-art software makeover. Making that happen took two years — such was the complexity of its inspirational hardware predecessor. PolyM palpably didn’t disappoint, deftly reproducing yesteryear’s divide-down technology with two TOD (Top Octave Divider) oscillators — one for the sawtooth wave and another for the square, slightly detuned for a phenomenal phasing effect (when running independently in FREE mode), yet taking the concept further forward by adding polyphonic pulse width modulation. Meanwhile, in LOCK mode, those two TOD oscillators are almost locked in phase, producing PM (Phase Modulation) instead of FM (Frequency Modulation) when the square wave oscillator is modulated in pitch. The two TODs can also be modulated — tempo-sync-able — in pitch by an LFO (Low Frequency Oscillator), while the square wave oscillator has it own pulse width modulation by a tempo-sync-able LFO. Alongside a distinctive envelope generator, this represents the musical heart and soul of PolyM, pushing that revolutionary polysynth sound kicking and screaming into the future!
Further features of note include: 71 emulated chips, offering mixer, VCA (Voltage-Controlled Amplifier), envelope, 12dB filter, and pulse width modulation for each of the available notes; stunning-sounding 24dB ladder filter (using XILS-lab’s critically-acclaimed zero-delay algorithm); nine dedicated acoustic filters — STRING, PIANO, ORGAN, HARPS, FUNK, CLAV, VIBES, BRASS, and VOX — carefully recreated from the original (model 203a); RESONATORS filter bank with three parametric (6dB and 12dB) filters matching the original; three vintage — DEL. (delay), PHAS. (phaser), and REV. (reverb) — effects (with adjustable settings from within an Advanced Settings Panel alongside nine modulation slots for furthering sound design possibilities well beyond the scope of the original hardware); and more.
Today, thanks to the PolyM 1.1.0 update, there’s even more to (literally) make a song and dance about. As such, the NPM (New Preset Manager), a newly-integrated, single-window affair allowing users to easily and speedily perform different tasks with welcomed visual feedback — for example, locate and load the best fitting preset in seconds courtesy of a multi-criteria search engine, save/save as presets with (user-generated) tags, batch-tag multiple selections of presets, export/import multiple selections of presets, and select view (such as showing only favourite presets) — represents a major step in PolyM’s evolution; by that same token, those acoustic filters and RESONATORS, as well as the three vintage-sounding effects, are also available to work with other sound sources when running PolyM purely as an effects plug- in proffering plentiful possibilities for modulation; meanwhile, support for Native Instruments’ NKS® extended plug-in format for all virtual instrument developers delivers intuitive and seamless interaction with the German giant’s cutting-edge KOMPLETE KONTROL S-Series keyboards and MASCHINE hardware.
Helpfully, there are now over 300 professionally-programmed presets available as creative kickstarters in PolyM; parameters are all MIDI- controllable, combining to musically position this soft synth par excellence as an innovative instrument of its time while retaining a certain pioneering polyphonic analogue synthesizer’s coveted performance properties of the past. Put it this way: while what the deceased Austrian neurologist (and founder of psychoanalysis) Sigmund Freud would have made of this polysynth hommage is obviously open to speculation, surely the still active Gary Numan should approve… as will anyone’s bank balance by paying (comparatively) so little for so much playing pleasure. Thanks to its welcomed 1.1.0 additions, PolyM pushes beyond the pleasure principal in both senses, so anyone wishing to sonically travel back to the future should seriously consider adding it to their soft synth arsenal — all the more so at an attractive (albeit time-limited) introductory promo price representing a welcomed 40% saving. Best be quick, though — time waits for no man… or woman (or child)!
PolyM 1.1.0 is available to purchase as a USB eLicenser or iLok (1 and 2 dongle hardware or software) protected plug-in at an introductory promo price of €89.00 EUR until October 31, 2018 — rising thereafter to an MSRP of €149.00 EUR — from XILS-lab here: https://www.xils-lab.com/products/polym-p-160.html
PolyM 1.1.0 can be directly downloaded as a multi-format (AAX, AU, RTAS, VST), 32- and 64-bit soft synth and virtual effects plug-in for Mac (OS X 10.7 and later) and Windows (XP, 7, 8, 10) from here: https://www.xils-lab.com/products/polym-p-160/download.html