So below I’ll post the regular press release and info but lets talk about why this release actually matters. 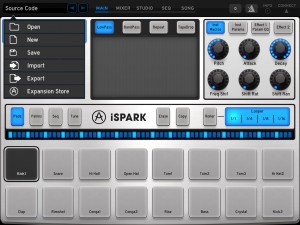 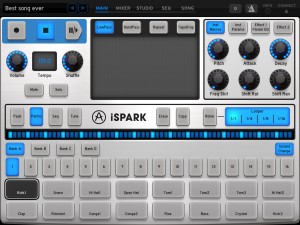 By transporting its innovative SPARK 2 drum production desktop software solution — taking the best elements from analogue drum machines, sample-based beat boxes, and cutting-edge physical modelling, then rolling them into an easy-to-use, elegant package as arguably the most powerful and creative drum solution available today — to the iPad as iSPARK, Arturia is ushering in a new era of inspirational mobile beat-making like no other. From the most straightforward four-on-the-floor rhythms to the craziest trap beats, iSPARK is, indeed, the ultimate mobile beat-making solution!
So, on the face of it, the SPARK 2 software and iSPARK app are truly beat-making brethren, sharing much of their content — projects, kits, and instruments. iSPARK is also compatible with Arturia’s award-winning SparkLE ultra-compact controller — just like SPARK 2 before it! So why not connect a SparkLE to an iPad running iSPARK to take full advantage of the comfort offered by a high-quality hardware controller? In keeping with this integration, iSPARK’s user interface is strongly reminiscent of the popular SparkLE’s layout, but optimised for iPad.

iSPARK’s intuitiveness impressively allows the user to get on with beat-making, making the most of an almost endless supply of creative inspiration without worrying about the cutting-edge technology that lies beneath. For starters, 40 factory kits lead the way to a variety of musical styles and soundscapes. Create kits by selecting from no fewer than 640 individual instruments, importing samples, and tweaking from a long list of parameters, thanks to the MIXER and STUDIO screens. 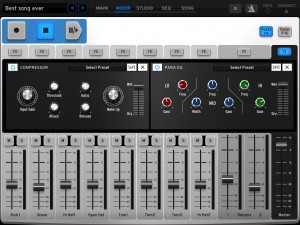 Speaking of which, iSPARK’s MAIN screen is all about performance, allowing users to conceive patterns on the fly using its flexible 64-step sequencer or by realtime recording with the highly-responsive virtual pads. Jump between patterns in an instant or chain them together using an advanced SONG mode to create complete and complex performances. Indeed, iSPARK is designed to make the most of its host as an amazingly able iPad app by bringing a broad range of performance possibilities to the table (or tablet). Polyvalent XY touch pads make modifying the filter cutoff and resonance a breeze while also allowing the Roller/Looper to be dynamically activated. iSPARK integrates an awesome automation tool that can be used to bring realtime movement to dozens of parameters simultaneously!

In-app Expansion Packs featuring a myriad of additional drum kits for iSPARK can be purchased for €3.99 EURO/$3.99 USD each.

I’m kinda in love with the panoptigon @QuilterLabs fantastic! Can do some amazing lofi instagram.com/p/B7hFIrdBR1_/…

reavismitchell you might know him as the real man behind the beat thang . Here at #namm2020 doing big things with @IconProAudio #fluxwithit instagram.com/p/B7ebDAfB3US/…