Well while I’m on this 8 hour journey back home I thought I would type out some of my impressions of what all went down at Namm.

First let me just say modular has gone main stream. Normally at Namm I tend to spend a lot of time roaming across all 4 floors… But this year I found my self staying In a very tight location. Why? Well because aside from very few exceptions ALL the interesting things were in the WMD both area. We had expected a sampler from roland (but then we rush to roland

every year looking for a new MV8000 and every year we leave heads down, this year was no different aside from seeing the sexy system 500 eurorack modules. 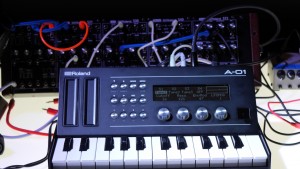 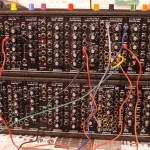 Akai I had it’s MPC’s 2.0 beta not on full display but teasing. MPC’s studio black seems nice and Mac touch is an interesting take on an old style. No analog (aside from a turntable purely designed for listeners NOT dj’.

Let’s start with the 4ms dual looping delay. This module is crammed with functionality as its SMR module was last year. Really freaking cool. Sounded fantastic and IMHO compared to something like the strymon generalissimo … Offers way more bang for the buck. Straight forward controls, long and extremely short delay times, interesting use of triggers and you have a winner in my book. Really looking forward to that. 4ms also had their sampler on hand but it seems to be a ways off so I won’
t focus on that.

Hex inverter was there with his incredibly dope drum modules. I had not had the pleasure of playing with the mutant snare until Namm. Let me just say it surprised the hell out of me. I expected same old 808 snare type sounds, that was not the case, this thing is cracking. I really liked the mutant machine and was worried the mutant snare wouldn’t be deep enough for what I would want… How wrong I was. Yeah I’m drooling for one.

Qu-bit has gone mental and decided to do a crazy ass polyphonic ANALOG vco that auto harmonizes … Has all sorts of chords you can step through spreads and much more. I was mind f*cked by this thing and I can say I didn’t want a smoke when finished. Their sequencers were linked in a pair and I have to say the whole system was just very classy looking and sounded wonderful. Those guys are on the come up. 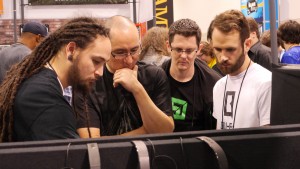 Studio electronics … Where to start, ok I gotta talk bass. This guy knows bass. And I don’t mean oh yeah it can get subby… No I mean he is stepping out in huge platforms, feathered hat , star shape glasses and putting funk all over your quivering body! All of the SE modules are built like tanks and sound great but damn the main thing about them is that they are just damn musical. He had this kinda complete bass synth voice thing there the name escapes me on this flight but I will update this if I remember. The thing just sounded great and he had energy for days to let us all feel it. Quadnik digital 4 part vco sounds huge and glorious. Charcot circles was immediately playable. Not hunt and peck but something you can actually vibe out on. Really cool usage of space and design. 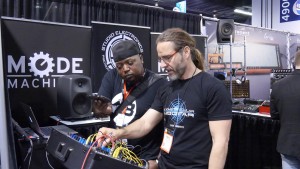 Bastl instruments have gone bonkers with their do motor set up. I was really impressed when I realized how deep you can go with them. Very well thought out. Not just relegated to some artsy esoteric nonsense… I can actually see me using these for sound design due to the level of control the modules give you. Super cool and I’m gonna need that in my life. They seem totally uninhibited by prior concepts, their somewhat silly broken wire module is a very simple thing that many might scoff at but it’s an interesting take on a pseudo predictable random source modification. I dig that sort of out of the box thinking. 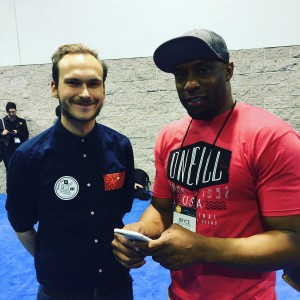 Mordax had their scope (and much more) module on display and I have to say… In person you really start to see the value in that thing. I’ll admit I was one who saw it online and thought “oh that’s cool” till I heard the price point… Now I get it. It does some great cv scoping, can be a vco and more and it looks and functions in a very high class way. Completely justifiable IMHO. The display is Vivid and I love that you can handle multiple channels at once.

Synthrotek and mattson modular seem to have improved each other as in the last year those modules have just gotten cooler and cooler. Their filter sounds smooth and just has a refined character about it. The vco is rock steady , the USB midi interface looks really cool (I’ll know more about it when I get home as I had one shipped out while I was at Namm ) and the fact that they have made a push toward cohesive complete systems is a smart one IMHO . Synthrotek has been making cool ass cases and power for a while so it just makes sense IMHO. 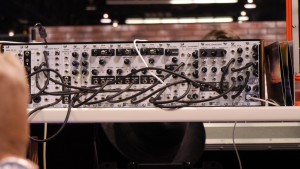 Delptronics I had never really had much experience with before. I knew of the trigger an as a efficient yet feature filled solution for drum sequencing but beyond that I knew little. After meeting mr. Delp himself I came away with an appreciation for what it is he is doing. His new little drummer boy 2 and expansion looks cool but I have to admit, it’s the cv to midi module I can’t get my mind off of. A massive amount of cv in, fast micro controller reponse , and I can make my digital gear act like it knows what’s up in the modular world… Yes please all day. They had some great stand along boxes that on paper sound all to simple to be of use. Then you actually play them…. I believe the word is addictive guilty pleasures. The arcade drum machine was a joy to play and who the hell doesn’t love the idea of a digital cowbell inside of a real cowbell… That is dope I don’t care what others think. 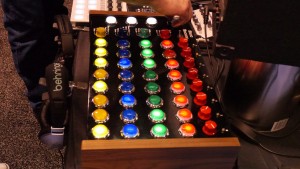 Make noise was there… They had some stuff, I barely touched it. The no coast looked pretty cool especially as a way for a non modular person to get a taste of what the unique world of modular has to offer. Just didn’t really grab me yet. Tempi looked interesting but I didn’t spend much time over there m hopefully later I can check it some more. 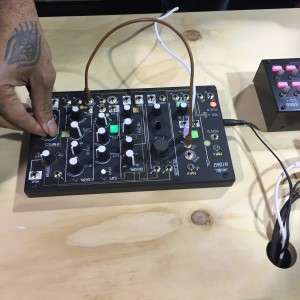 Noise engineering had some cool modules but I didn’t get to film them, maybe next year? The new modules look good and I heard they may be redesigning their panel looks which I think is good. Though I kinda like the purple oddball look.

Pittsburgh modular had their lifeforms system which was a draw and was very cool. Extremely slick looking. The real cool thing was they finally have cases with power that looks proper (6amps) . This could be a very good move for them. 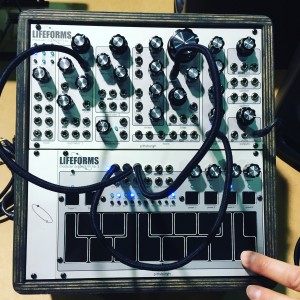 Tiptop audio was getting plenty of press and wasn’t around each time I tried to film them. That doesn’t mean I wasn’t interested. Their new cases looked really cool. They have thunderbolt for clock sync, a really nice for, factor, are realatively light a flexible kickstand for different angles . The price point with power was I believe $349 for 6u 104 hp… Very very impressive

Neutron sound had the orgone accumulator there in a standalone keyboard case, unfortunately it was often I patched due to fools walking past and not knowing how to use it. I had hoped someone was there to demonstrate it… Luckily I am well versed and showed a few people it’s usefulness and did a video with ,self as the demonstrator .. F it right? A good module deserves representation .. 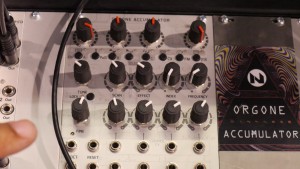 Oberheim was there and kind enoug to sit down with me. No ego, no copy… Just Tom talking modular and that was great. Though he speaks really soft so I’m worried how the audio is going to turn out. The modules look and feel fantastic. True to form. 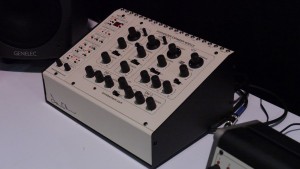 Rossum electro music was there… Meh….   Just kidding, I was super excited by this! Dave was so gracious , energetic and just glowing with joy about the community and his return to modular. Really what more could you ask for? Oh some cool yet to be seen modules? Done. He gave me a look at what he has in the works and I was very impressed. He seems to really have a handle on where he wants to go in modular and that is great news for al of us. I want them all.

Soulsby had their eurorack modules up and running… I have to say, dead sexy. They have these cool as wooden ends that will be used to hold new faceplate skins on. Very cool idea and it looks great. The sound was really inspiring as well the vocoder like effect was super rad, can’t wait to play some hip hop samples through it. I loved the look and build quality of these. I think they have a bright future in euro. 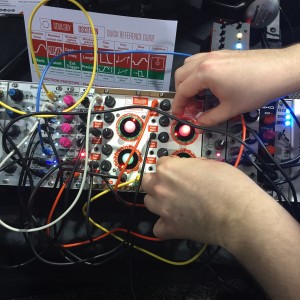 Mode machines had their eurorack modules but what really had me excited is the adx1 drum machine and the dt7 dx7 controller. Yeah it’s got 96 knobs and yeah it actually makes a dx7 dope again… Very cool. The omf1 filer is a 19″ rack ladder filter with q compensation and lfo plus envelope modulation I’ll have a review up soon.

There is so much more to cover but my flight is landing. I don’t know how many of you will read this but I thought it good to document. Plus this is about the only app on my iPad I could stand to use right now lol.