GRENOBLE, FRANCE: virtual instrument- and effect plug-in-specialising software company XILS-lab is proud to announce availability of KaoX — a virtual instrument inspired by a legendary FM (Frequency Modulation) synthesizer, albeit bolstered by virtual analogue sound synthesis and additional chaotic algorithms in an advanced two-layer architecture allowing for a powerful sound creation tool to fuel DAW-driven synthesizer dreams with a much more easily understood signal path than its iconic FM forefather — as of April 12…

KaoX is available to purchase as an iLok (2 and 3 dongle hardware or software) protected plug-in priced at an introductory promo price of €99.00 EUR until May 15, 2021 — rising thereafter to an MSRP (Manufacturer’s Suggested Retail Price) of €179.00 EUR — directly from XILS-lab via the dedicated KaoX webpage (https://www.xils-lab.com/products/kaox-p-168.html), which also includes more in-depth information.

KaoX can be directly downloaded as a multi-format AAX, AU, and VST (Mac OS X 10.8 and later) and AAX and VST (Windows 7, 8, and 10) plug-in from here: https://www.xils-lab.com/products/kaox-p-168/download.html
Listen to several KaoS-showcasing demo tracks providing the soundtrack to XILS-labs’ latest teaser video here: https://youtu.be/qeZJvGe6a4Y

This module is available now from Audio damage. check them out at their site http://www.audiodamage.com/hardware/product.php?pid=ADM12

END_OF_DOCUMENT_TOKEN_TO_BE_REPLACED 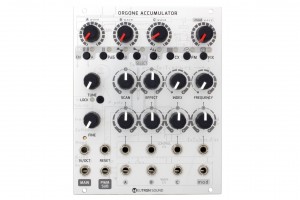 Yes thats right … there is a NEW Orgone Accumulator (referred to as OA from here on) on the block and its a big deal! So you might be scratching your head wondering what the OA actually is. The OA is at its fundamental, a wavetable VCO… a complex one at that. At the top side of the module you will see there are 3 wave controls and a modulator control. The three wave controls correspond to 3 wavetables which can each be morphed and twisted in its own way.  Independent control of each waveforms effect is available with push buttons below the wave controls.. at this point before we dive to deep let me just put it this way, The OA is a complex triple wavetable VCO, the fourth knob is an independent wavetable dedicated as a modulator. BUT WAIT THERE IS MORE! thats right, on top of being a fantastic complex VCO, the OA also is END_OF_DOCUMENT_TOKEN_TO_BE_REPLACED