The Synthesis Technology E520 is a much anticipated FX module. The Kickstarter page has now gone live as of only 4 hours ago and is already more than 3/4 of the way funded.

Focused on Spectral FFT fx to manipulate audio. Pitch shifting vocoding and spectral crushing to name a few. the E520 is also capable of high quality time domain fx such as looping, delays, and more.

The Kickstarter has some interesting rewards such as early bird pricing and a bundle that includes a 4ms pod case for stand alone usage. check out the kickstarter now to secure your early bird price!

I recently sat down with Paul Schreiber of Synthesis technology for an indepth interview about the e520. Check out the SynthSummitShow episode

Paul is known for being an excellent interview and though we were planning on keeping this one to just an hour…. well there is just too much good stuff to talk about!

be sure to check out the kickstarter and share it around to support another impressive module from synthtech!

here is a link to the E520 demo page for some nice audio examples. https://synthtech.com/eurorack/E520_DEMO/

The Elysia Karacter is a really interesting rack unit and not just because it’s a high quality distortion or saturation.  The Karacter gives you a ton of tone shape characteristics and control in one simple 1u rack space. Control Voltage seems to be a buzz these days and for good reason. Control voltages give you extremely fast precise control over parameters and allow for easy interaction not just with modular gear but with various studio pieces. Karacter Gives you CV control which isn’t very common in units of this style. Lets talk more about the sound. There are a few modes of color to grab from this unit, the first of which is saturation. END_OF_DOCUMENT_TOKEN_TO_BE_REPLACED 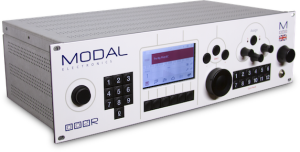 Modal rocks… and rolls 002 super-synth into rack-mountable form factor at Musikmesse 2015!
BRISTOL, UK: breakthrough British electronic musical instruments manufacturer Modal Electronics is proud to present 002R, responding positively to numerous requests for a ‘non-keyboard’ form factor 002 version of its high-flying, highly-specified super-synth, and representing the second of three new ‘numerical’ products that it is simultaneously showcasing at Musikmesse 2015, April 15-18 in Frankfurt, Germany…
All three of these new synthesisers share the OS (Operating System) common to 002, so speed of development is now rapidly accelerating. Amazingly, within mere months of 002 taking the synth world by storm at the time of its July 2014 launch, then turning heads and opening ears at The NAMM Show 2015, January 22-15, in Anaheim, California, today’s amazing announcement — after all, no other synthesiser manufacturer has delivered such a diverse range of cutting-edge instruments in less than a year — coincides with Modal Electronics experiencing rapid growth, establishing a growing global network of authorised dealers while expanding its home-grown talented team by hiring some of the most brilliant (synth design) minds in the UK.

Who better to formally introduce 002R, then, than one of the most brilliant synth design minds in the UK — Modal Electronics co-founder and Director Paul Maddox: “002R was designed to address two issues — firstly, studios and musicians who may not necessarily have room for a full-sized 002; secondly, several customers have requested an expander for 002 to increase polyphony count, especially when used in multitimbral mode which comes with OS 7.25.”

Flying in the face of desktop synth mania, Modal Electronics opted to take the power and flexibility of 002 and — after an astronomical amount of design work — repackage it into an industry-standard 3U rack-mountable form factor. Why? Well, simply speaking, there’s too much ‘technology’ inside 002 — no fewer than 11 circuit boards! — to make a desktop version. The very nature of discrete analogue circuitry simply wouldn’t allow for it, in other words. 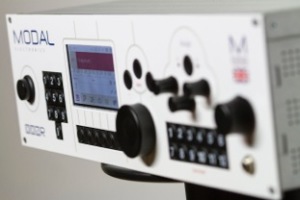 When designing 002R, Modal Electronics decided to make it available in two versions — 002R(12), providing the full 12 voices of 002, and 002R(8), providing eight voices of 002 sound — perfect for those on a tighter budget, or perhaps wanting it to act as an eight-voice expander for an existing 002. Either way, both versions are fully patch compatible with 002, offering all of its fanciful features — not least an amazing analogue/digital hybrid voice architecture with either eight or 12 voices of polyphony (up to 12-part polyphonic). Voices can be played in unison or ‘stacked’ for more complex timbres. The Animator allows for monumental modulation flexibility, bringing 12 animated ‘rows’ of parameter sequencing into productive play. Speaking of sequencing, the onboard Sequencer supplies two tracks of 32 steps, each with up to 12 notes/parameters, providing polyphonic part playback. Performance-wise, an advanced Arpeggiator abounds with multiple modes and features to musically die for.
Front panel access to all the key features needed for studio and live usage are all present and accounted for — for example, Quick Recall of preferred presets and instant part Select (in multitimbral mode). Modal Electronics’ proprietary Quick Navigate functions allow any edit page, parameter on a page, and associated values to be instantly edited using the three ‘macro’ keys.
Key to accessing the underlying power of 002R really becomes readily apparent, however, when using the Modal Web interface… use any HTML5-compatible web browser — Chrome, Firefox, Safari, et al — on any platform that supports a browser — desktop, laptop, smartphone, or tablet — for full control and editing of 001R’s functions via its Ethernet connection… no need for a plug-in! Indeed, Internet- connectivity for straightforward software updates is a breeze, as will be accessing additional features from Modal Cloud — coming later this summer. So watch this space…
Featuring the same high-quality constructed chassis as its keyboard-based brother, 002, 002R also includes a back panel-positioned expansion slot — for forthcoming fanciful digital expansion card accommodation, providing two channels of 24-bit/192kHz Audio Out(put) over USB into its user’s favourite DAW (Digital Audio Workstation). Again, as is the case with both 002 and its Musikmesse 2015-announced smaller sibling, 001, 002R includes an internal, worldwide — 60 Watts | 100 – 240V | 50 – 60Hz — auto-sensing Power supply with IEC (International Electrotechnical Commission) mains inlet — no wobbly ‘wall wart’ hiding here, thanks very much!
Modal Electronics’ one and only 002R will be being demoed and displayed in Hall 5.1, Stand A76 at Musikmesse 2015, April 15-18 in Frankfurt, Germany. Get down there today and come check it out! We would welcome making your musical acquaintance, whether your super-synth preference remains racked or otherwise. Either way, Modal Electronics’ British-built synthesisers will surely rock your musical world.
002R is scheduled to ship in late-May 2015. Available through Modal Electronics’ growing global network of authorised dealers, its retail price will start at £1,795.00 GBP (plus VAT)/£2,154.00 GBP (including VAT); €2,395.00 EUR (plus VAT — varying rates throughout Europe); and $2,595.00 USD (plus sales taxes where applicable) for the 002R(8) eight-voice version. Likewise, the 12- voice version, 002R(12), will be also available in late-May 2015, retailing at £1,995.00 GBP (plus VAT)/£2,394.00 GBP (including VAT); €2,595.00 EUR (plus VAT — varying rates throughout Europe); and $2,995.00 USD (plus sales taxes where applicable). Alternatively, 002R(8) can be expanded to a full 12-voices at a later date for £329.00 GBP (plus VAT)/£395.00 GBP (including VAT); €449.00 EUR (plus VAT — varying rates throughout Europe); and $495.00 USD (plus sales taxes where applicable).
For more in-depth information about 002R, please visit the Modal Electronics website: www.modalelectronics.com

Check it out HERE